10:12 PM
Myth 5.4: Negative Growth Rates forever? Impossible! - Hello Friends as always i would invite you to join and Promote one of the world's premier top rated investment companies and pioneers in alternative assets: market investment in and purchasing of alternative asset classes including gold, precious metals, Bitcoin and other cryptocurrency for direct purchase investors, the vast US market of IRA, 401k and other retirement account holders, the Canada market for RRSP and TFSA holders (precious metals), high net worth individuals and families (HNWI), and more. Mutl-trillion dollar potential market with one of the highest paying affiliate programs in the world.

As you peruse discounted cash flow valuations, it is striking how infrequently you see projections of negative growth into the future, even for companies where the trend lines in revenues and earnings have been anything but positive. Furthermore, you almost never see a terminal value calculation, where the analyst assumes a negative growth rate in perpetuity. In fact, when you bring up the possibility, the first reaction that you get is that it is impossible to estimate terminal value with a negative growth rate. In this post, I will present evidence that negative growth is neither uncommon nor unnatural and that the best course, from a value perspective, for some firms is to shrink rather than grow.
Negative Growth Rates: More common than you think!
The belief that most firms have positive growth over time is perhaps nurtured by the belief that it is unnatural for firms to have negative growth and that while companies may have a year or two of negative growth, they bounce back to positive growth sooner rather than later. To evaluate whether this belief has a basis in fact, I looked at compounded annual growth rate (CAGR) in revenues in the most recent calendar year (2015), the last five calendar years  (2011-2015)and the last ten calendar years (2006-2015) for both US and global companies and computed the percent of all companies (my sample size is 46,814 companies) that have had negative growth over each of those time periods:

Note that almost 40% of all companies, in both the US and globally, saw revenues decline in 2015 and that 25% of all companies (and 27% of US companies) saw revenues decline (on a CAGR basis) between 2006 and 2015. (If you are interested in a break down by country, you can download the spreadsheet by clicking here.) Digging a little deeper, while there are company-specific reasons for revenue declines, there are also clearly sector effects, with companies in some sectors more likely to see revenues shrink than others. In the table below, I list the ten non-financial sectors with the highest percentage of companies (I excluded financial service companies because revenues are difficult to define, not because of any built-in bias):

So what? For some of these sectors (like real estate and homebuilding), the negative revenue growth may just be a reflection of long cycles playing out but for others, it may be an indication that the business is shrinking. If you are valuing a company in one of these sectors, you should be more open to the possibility that growth in the long term could be negative. (If you interested in downloading the full list, click on this link.)

Negative Growth Rates: A Corporate Life Cycle Perspective
One framework that I find useful for understanding both corporate finance and valuation issues is the corporate life cycle, where I trace a company’s life from birth (as a start-up) to decline and connect it to expectations about revenue growth and profit margins: 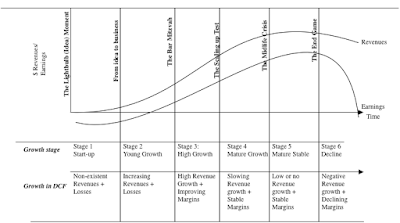 If you buy into this notion of a life cycle, you can already see that valuation, at least as taught in classes/books and practiced, is not in keeping with the concept. After all, if you apply a positive growth rate in perpetuity to every firm that you value, the life cycle that is more in keeping with this view of the world is the following: 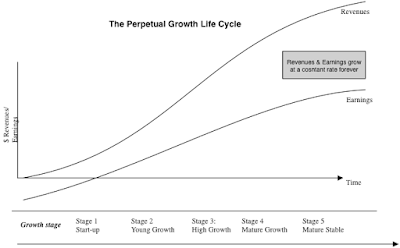 The problem with this life cycle perspective is that the global market place is not big enough to accommodate these ever-expanding behemoths. It follows, therefore, that there have to be companies (and a significant number at that) where the future holds shrinkage rather than growth. Fitting this perspective back into the corporate life cycle, you should be using a negative growth rate in revenues and perhaps declining margins to go with those shrinking revenues in your valuation, if your company is already in decline. If you are valuing a company that is mature right now (with positive but very low growth) but the overall market is stagnant or starting to decline, you should be open to the possibility that growth could become negative at the end of your forecast horizon.

There is an extension of the corporate life cycle that may also have implications for valuation. In an earlier post, I noted that tech companies age in dog years and often have compressed life cycles, growing faster, reaping benefits for shorter time periods and declining more precipitously than non-tech companies. When valuing tech companies, it may behoove us to reflect these characteristics in shorter (and more exuberant) growth periods, fewer years of stable growth and terminal growth periods with negative growth rates.
Negative Growth Rates: The Mechanics
As I noted in my last post, the growth rate in perpetuity cannot exceed the growth rate of the economy but it can be lower and that lower number can be negative. It is entirely possible that once you get to your terminal year, that your cash flows have peaked and will drop 2% a year in perpetuity thereafter. Mathematically, the perpetual growth model still holds:

To illustrate, consider the example of the firm with $100 million in expected after-tax operating income next year, that is in perpetual growth and let’s assume a perpetual growth rate of -5% a year forever. If you assume that as the firm shrinks, there will be no cash flows from selling or liquidating assets, the terminal value with a 10% cost of capital is:
Terminal value = $100/ (.10-(-.05)) = $666.67
If you assume that there are assets that are being liquidated as the firm shrinks, you have to estimate the return on capital on these assets and compute a reinvestment rate. If the assets that you are liquidating, for instance, have a 7.5% return on invested capital, the reinvestment rate will be -66.67%.
Reinvestment rate = -5%/7.5% = 66.67%
If you are puzzled by a negative reinvestment rate, it as the cash inflow that you are generating from asset sales, and your terminal value will then be:
Terminal value = $100 (1-(-0.6667))/ (.10 – (-.05)) = $1,111.33
Put simply, the same rule that governs whether the terminal value will increase if you increase the growth rate, i.e., whether the return on capital is greater than the cost of capital, works in reverse when you have negative growth. As long as you can get more for divesting assets than as continuing investments (present value of cash flows), liquidating them will increase your terminal value.
Negative Growth: Managerial Implications
Our unwillingness to consider using negative growth in valuation has turned the game over to growth advocates. Not surprisingly, there are many in academia and practice who argue that the essence of good management is to grow businesses and that the end game for companies is corporate sustainability. That's nonsense! If you are a firm in a declining business where new investments consistently generate less than the cost of capital, your attempts to sustain and grow yourself can only destroy value rather than increase it. It is with this, in mind, that I argued in an earlier post that the qualities that we look for in a CEO or top manager will be different for companies at different stages of the life cycle: 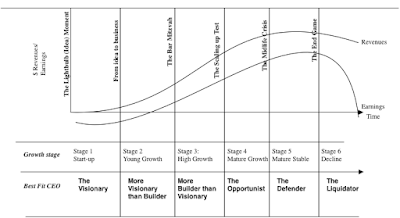 A visionary at the helm is a huge plus early in corporate life, but it is skill as a business builder that allows young companies to scale up and become successful growth companies. As growth companies get larger, the skill set shifts again towards opportunism, the capacity to find growth in new places, and then again at mature companies, where it management’s ability to defend moats and competitive advantages that allow companies to harvest cash flows for longer periods. In decline, it is not vision that you value but pragmatism and mercantilism, one reason that I chose Larry the Liquidator as the role model. It is worth noting, though, that the way we honor and reward managers follows the growth advocate rule book, with those CEOs who grow their companies being put on a much higher pedestal (with books written by and about them and movies on their lives) than those less ambitious souls who presided over the gradual liquidation of the companies under their command.
Conclusion
I believe that the primary reason that we continue to stay with positive growth rates in valuation is behavioral. It seems unnatural and even unfair to assume that the firm that you are valuing will see shrinking revenues and declining margins, even if that is the truth. There are two things worth remembering here. The first is that your valuation should be your attempt to try to reflect reality and refusing to deal with that reality (if it is pessimistic) will bias your valuation. The second is that assuming a company will shrink may be good for that company's value, if the business it is in has deteriorated. I must confess that I don't use negative growth rates often enough in my own valuations and I should draw on them more often not only when I value companies like brick and mortar retail companies, facing daunting competition, but also when I value technology companies like GoPro, where the product life cycle is short and it is difficult to keep revitalizing your business model.