2:03 AM
A Valeant Update: Damaged Goods or Deeply Discounted Drug Company? - Hello Friends as always i would invite you to join and Promote one of the world's premier top rated investment companies and pioneers in alternative assets: market investment in and purchasing of alternative asset classes including gold, precious metals, Bitcoin and other cryptocurrency for direct purchase investors, the vast US market of IRA, 401k and other retirement account holders, the Canada market for RRSP and TFSA holders (precious metals), high net worth individuals and families (HNWI), and more. Mutl-trillion dollar potential market with one of the highest paying affiliate programs in the world. 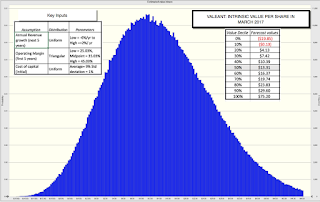 The simulation confirms the base case intrinsic valuation, insofar as the median value of $13.31 is close to the price at the time of the valuation ($12) but it provides more information that may or may not tilt the investment decision. There is a clear chance that the equity could go to zero (about 12%), if the value dips below the outstanding debt ($29 billion). At the same time, there is significant upside, if the company can find a way to alter its trajectory and become a boring, low growth drug company.
2. Acquisition Target: It is a sign of desperation when as an investor, your best hope is that someone else will acquire your company and pay a premium for it. I am afraid that the Valeant taint so strong and its structure so opaque and complex that very few acquirers will want to buy the entire company. I see little chance of this bailing me out.
3. Sum of its parts, liquidated: It is true that Valeant has some valuable pieces in it, with Bausch & Lomb and Salix being the biggest prices. While neither business has attracted as much attention as Valeant had hoped, there are two reasons why. The first is that Ackman, with significant losses on the stock and a seat on the board, may have exercised some veto power over any potential sales. The second is that potential buyers may be scared away by Valeant's history. One solution, now that Ackman is no longer at the company, is for Valeant to open its books to potential acquirers and sell its assets individually to the best possible buyers. Note that this liquidation value will have to exceed $29 billion, the outstanding debt, for equity investors to generate any remaining cash.
There is one other macro concern that may make Valeant's future more thorny. As a company that pays a low effective tax rate and borrows lots of money, the proposed changes to the tax law (where the marginal tax rate is likely to be reduced and the tax savings from interest expenses curbed), Valeant will probably have to pay a much higher effective tax rate going forward, one reason why I have shifted to a 30% tax rate for the future.
The Bottom Line
Let's start with the easy judgment. This was not an investment that I should have made and much as I would like to blame macro forces, the company's management and Bill Ackman for my losses, this was my mistake. I was right in my initial post in concluding that the company's old business model (of acquiring growth with borrowed money and repricing drugs) was broken but I clearly underestimated how much damage that model has done to the company's reputation and how much work it will take for it to become a boring, drug company. In fact, it is possible that the damage is so severe, the company will not be able to make the adjustments necessary to survive as a going concern.
So, now what? I cannot reverse the consequences of my original sin (of buying Valeant at $32) in April 2017 and the secondary sin (of doubling down, when Valeant was trading at $14) by selling now. The question then becomes a simple one. Would I buy Valeant at today's price? If the answer is yes, I should hold and if the answer is no, I should fold. My intrinsic value per share has dropped to just above where the stock is trading at now, and at this stage, my judgment is that, valued as a going concern, it would be trading slightly under value. In a strange way, Bill Ackman's exit is what tipped the scales for me, since it will give Valeant's management, if they are so inclined, the capacity to make the decisions that they may have been constrained from making before. In particular, if they recognize that this may be a clear case where the company is worth more as the sum of its liquidated parts than as a going concern, there is still a chance that I could reduce my losses on this investment. Note, though, that based on my numbers, I don't expect to make my original investment (which averages out to $21/share) back. I am not happy about that but sunk costs are sunk!

As I continue to hold Valeant, I am also aware that I might be committing one of investing's biggest sins, which is an aversion to admitting mistakes by selling losers. My discounted cash flow valuations may be an after-the-fact rationalizing of something that I don't want to do, i.e., sell a big loser. To counter this, I briefly considering selling the shares and rebuying them back immediately; that makes me admit my mistake and take my losses while restarting the investment process with a new buy, but the "wash sales" rule is an impediment to this cleansing exercise. The bottom line is that if I am holding on to Valeant, not for intrinsic value reasons (as I am trying to convince myself) but because I have an investing blind spot, I will be last one to know!