10:54 AM
C-day and military money - Hello Friends as always i would invite you to join and Promote one of the world's premier top rated investment companies and pioneers in alternative assets: market investment in and purchasing of alternative asset classes including gold, precious metals, Bitcoin and other cryptocurrency for direct purchase investors, the vast US market of IRA, 401k and other retirement account holders, the Canada market for RRSP and TFSA holders (precious metals), high net worth individuals and families (HNWI), and more. Mutl-trillion dollar potential market with one of the highest paying affiliate programs in the world. 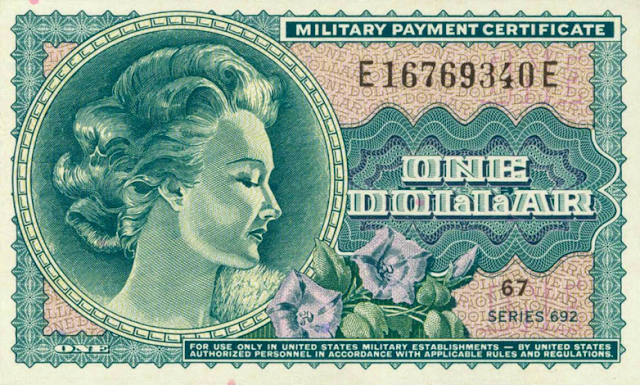 Did Indian PM Narendra Modi get the idea for the recently-executed demonetization by watching old episodes of M*A*S*H, a 1970s hit TV show set in the Korean War?

In the clip below, M*A*S*H's Colonel Potter is alerted to an imminent phasing out old "blue" military money with red, the idea behind the switch to punish counterfeiters and black marketers. As the conversion is happening, Colonel Potter is ordered to make sure that the gates to the base are closed so as to prevent illegitimate blue money from being smuggled in for changing. Sounds a bit like Modi's November 8, 2016 sudden phasing out of ₹1000 and ₹500 notes, no?

The money switch depicted in the M*A*S*H episode isn't just fiction. During the Vietnam War, mass demonetizations were a fairly common event on military bases. To isolate dollar-using U.S. troops and civilian contractors from the regular Vietnamese monetary system, U.S. military authorities fashioned a parallel scrip-based system in which Military Payment Certificates, or MPCs, displaced regular dollars as the medium of exchange on U.S. bases (see top for an example).

All troops arriving in Vietnam were required to convert their U.S. cash into MPCs at a 1:1 rate. Over the course of a tour, troops received a monthly MPC stipend which could be spent at the army store on things like cigarettes or Pentax cameras. Usage of certificates by local Vietnamese or by troops off-base was prohibited. At the end of their tour, troops would reconvert all MPCs back in to dollars at the 1:1 rate, since any MPCs brought back to the U.S. were useless.

Unsurprisingly, the rule prohibiting non-American usage of MPCs was ignored as Vietnamese retailers began accepting MPCs from American GIs in payment. This was seen as a bad thing by the U.S. military and Vietnamese government, since any spread of MPCs into the domestic economy would displace local currency (in Vietnam's case the piastre), hindering the goal of rebuilding the local economy. To counter dollarization, U.S. authorities would periodically carry out sudden cancellations of existing MPC, replacing them with a new issue of scrip so as to strand Vietnamese users. With all Americans being confined to base on conversion day , or "C-day", there was no way for locals to get U.S. soldiers to act as go-betweens for conversion. This ever-present threat of C-day should, in theory at least, slow down the dollarization of the Vietnamese economy.

The other reason for regularly cancelling and reissuing MPCs was to flush out U.S. troops engaged in black market activity.  All GIs were allowed to convert a fixed amount of old MPC on C-day, no questions asked. Unusually large conversion requests above that amount would be investigated by military police to ensure that this wealth hadn't been dubiously acquired. To avoid being investigated, a would-be black marketeer might choose to sacrifice their MPCs, thus losing a large amount of wealth. These periodic losses would drive up the costs, and attractiveness, of engaging in black market activity.

The success of these conversions depended on secrecy, since any leakage of an imminent C-day would cause unauthorized users of MPC to quickly convert their hoard into goods at the military store, or exchange them on the black market into piastre or regular dollars. According to Prugh, the first C-day on October 21, 1968 resulted in $276.9 million in certificates being converted, with $6.2 million going unaccounted for, presumably because they were in the hands of unauthorized persons. The next C-day occurred less than a year later, on August 11, 1969. In the next conversion on October 7, 1970, about 25% of recalled MPCs were not accounted for, according to this GAO document. The final C-day took place almost three years later on March 15, 1973.

There were all sorts of ways to game the scrip system. During their tour of duty, troops were allowed to exchange MPC into dollars and transfer that value home by money order, as long as this amount did not exceed the soldier's monthly stipend. To get around these limits, those holding excessive amounts of MPC could recruit others with spare sending capacity as 'straw men' to transfer money on their behalf. We saw this happening in India too. During the recent demonetization, each Indian was allowed to deposit ₹250,000 worth of demonetized notes during the 50-day conversion period, no questions asked. Those holding large amounts of rupees paid others under the table to make use of their shelter.

Another trick used by GIs was to have regular $100 bills mailed to Vietnam. A GI could sell these dollars to a local for MPC at a premium, says $110. Locals were willing to pay this premium because regular dollars, which couldn't be demonetized, offered them protection . The GI could then convert this $110 in MPC into $110 dollars upon departure (or by money order), thus earning $10 round-trip.

Modi's reasons for embarking on demonetization mirrors those of the Vietnam-era C-day. The U.S. military used conversions to encourage use of piastre among locals; Modi used it to encourage use of digital money. And both want to attack the black market. It is somewhat worrying, however, that the best historical analogue for Modi's demonetization comes from wartime. I do realize that the army has developed a number of technologies now in wide civilian use, including the internet, but as a general rule the mechanisms adopted to cope during wartime are probably not ideal for peacetime.

The MPC program died decades ago. Nowadays, regular cash circulates freely on U.S. army bases overseas. Interestingly, the military is making an effort to go cashless, due in part to the high cost of shipping banknotes and coin to distant war theaters. To help cut these costs, the Department of Defence used cardboard tokens, or "pogs", rather than metal coins in the recent wars in Iraq and Afghanistan.

The Department of Defence has also encouraged usage of the EagleCash card, a stored-value card. One thing is for sure: closed-loop digital money is a far more effective way than paper-based scrip for isolating an army from the domestic monetary system of the nation it is occupying.