The forking of the Indian rupee

11:18 AM
The forking of the Indian rupee - Hello Friends as always i would invite you to join and Promote one of the world's premier top rated investment companies and pioneers in alternative assets: market investment in and purchasing of alternative asset classes including gold, precious metals, Bitcoin and other cryptocurrency for direct purchase investors, the vast US market of IRA, 401k and other retirement account holders, the Canada market for RRSP and TFSA holders (precious metals), high net worth individuals and families (HNWI), and more. Mutl-trillion dollar potential market with one of the highest paying affiliate programs in the world. 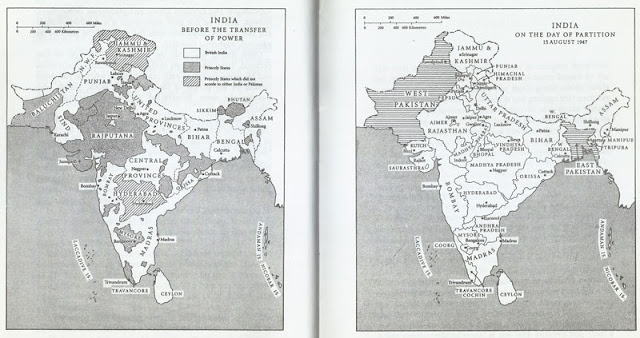 This post is about the dismantling of the rupee-zone between 1947-49, an historical event that is especially topical in light of two modern monetary projects: Narendra Modi's poorly-executed 2016 demonetization and a potential eurozone breakup.

Thanks to a recommendation by Amol Agrawal, who blogs at the excellent Mostly Economics, I've been pecking away at the 900-page history of the Reserve Bank of India, although I have to confess that I've spent most of my time on the chapter on the partition period. For those who don't know, India and Pakistan weren't always independent countries. Up until partition in August 1947, each was part of British India, a British colony. The rupee, which was issued by the Reserve Bank of India (RBI), was the sole medium of exchange in British India. By mid-1949, less than two years after partition, usage of RBI-issued rupees had been successfully limited to the newly-created state of India. As for Pakistan, it had managed to erect its own central bank, the State Bank of Pakistan, as well as introduce a new currency, the Pakistani rupee.

At the time of partition, Pakistan's architects faced a daunting challenge; given that the Brits had announced in early 1947 that the partition of British India was to occur that August, there remained only a few months to create a central bank and issue a new currency. Because printing enough new currency for an entire nation would take far more than a few months to achieve, a temporary solution was arrived at: to use the RBI as an interim agent for issuing currency until the new Pakistani central bank had its own printing presses up and running.

This "bridge" involved using a combination of regular RBI-issued rupees circulating within Pakistan at the time and "overprinted" notes issued by the RBI. To ensure that the purchasing power of the two rupees stayed locked, the overprints were to be accepted by the RBI at par with regular notes. When enough Pakistani rupees had been printed by the newly-created State Bank of Pakistan, or the SBP, the mix of India rupees and overprinted notes was to be demonetized and replaced by Pakistani rupees on a 1:1 basis. 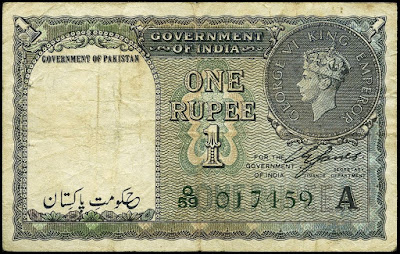 Note that they have the text "GOVERNMENT OF PAKISTAN" inscribed on them. Otherwise, overprints were just like regular rupees of the time.

---
Let's pause and bring this to the present. Like the rupee breakup of 1947-49, Modi's recent demonetization involved the cancellation of a large proportion of existing currency followed by an issue of new banknotes to replace them. (The 500 and 1000 rupee notes represented some 85% of India's paper money.) This is where the similarities between the two projects end. The architects of partition were wise enough to realize that they did not have enough time to print sufficient quantities of Pakistani rupees to replace Indian rupees, and so to avoid burdening the public with a shortage of cash they decided to use existing RBI-issued currency as a bridging mechanism.

Modi and his team of monetary architects evidently did not bother to familiarize themselves with RBI history. If they had, not only would they have realized what a huge task it is to replace the majority of a nation's currency, but they would also have learnt some tricks—like overprinting—to make the project easier. (Overstamping, a technique similar to overprinting, was successfully used in the break-up of the Austro Hungarian krona in 1991 as well as the Czechoslovak koruna in 1993.) This refusal to draw on the RBI's institutional memory means that some eight months after demonetization, Indians are still suffering from cash shortages.

---
Let's return back to the partition and explore the forking of the rupee more closely. The SBP, which was established July 1, 1948, formally took over the RBI-issued overprints as their liability that same day. As fresh Pakistan rupees came off the printing presses over the next months, SBP officials would steadily replace these overprints. That same day, the RBI subtracted the entire stock of overprinted notes from its total banknote liability. (The RBI had been issuing these notes since April.)

In taking over a large percent of the RBI's banknote liabilities, the SBP would need an equivalent set of assets to act as backing. These assets were to come from the RBI. More specifically, a fixed portion of the RBI's gold, coin, sterling-denominated securities, and rupee-denominated securities was to be transferred to the SBP, the rest remaining in India to serve a backing for RBI-issued rupee banknote.

To ensure fairness, a formula was settled on ahead of time to determine how the assets were to be apportioned. On a fixed date, the RBI would tally up how many notes were in circulation in Pakistan and how many in India, and divvy up the underlying assets according to the distribution of notes. That's fair way to do things, at least in theory. For the overprints, the RBI would record how many it had issued by July 1, 1948, and for each rupee overprint in existence it would transfer an equivalent quantity of assets to the SPB. When July 1 came, some 9.9% of the RBI's assets were dispatched to Pakistan. Thus one half of the mix of notes circulating in Pakistan, the overprints, had been demonetized.

There still remained the second half of the mix—regular Indian rupees. Dealing with these was more complicated. Unlike overprints, the RBI could have no firm measure for how many regular rupees were still being used in Pakistan, and thus had no way of knowing how many backing assets to transfer to the SBP. Intead, a mechanism for tallying up notes was established such that all Indian rupees circulating in Pakistan had to be brought to SBP offices for conversion into Pakistani rupees before July 1, 1949, one year after the central bank's founding. As Indian rupees flowed into the SBP over the course of the next twelve months, SBP officials remitted them to the RBI. The RBI then transferred an equivalent asset to the SBP for each Indian note it had received up until the expiry of the conversion period on July 1, 1949, after which the RBI ceased to accept remitted Indian rupees.

At this point, the RBI and the SBP were officially divorced. All liabilities and assets had been distributed to each respective party.

---
In a potential breakup of the euro, a formula like the one devised by the RBI will have to be used. The results, however, are likely to be messy. Because as I'll show, the divvying up of the RBI's assets wasn't without controversy.

If you look at the SBP's 2016 financial statements, you'll see an interesting line item called "Assets Held With the Reserve Bank of India":

So it seem that Pakistan never received what it believes to be its fair portion of the RBI's assets. For almost 70-years now it has carried these IOUs on its balance sheet (see historical date here). That's a long time to hold an asset that is unlikely to be collected! The reason for this odd balance sheet item can be found on page 568 or the aforementioned 900-page RBI tome. Between the founding of the SBP in July 1948 and the July 1949 cutoff date for note remittances to the RBI, more Indian rupees had filtered over the border into Pakistan than expected. As such, Pakistan was able to stake a larger claim on the RBI's assets than initially estimated.

Indian officials, who were not happy with the amount of assets they were sending over to Pakistan, now claimed that only those notes already in circulation in Pakistan as of July 1948 could legitimately be remitted for underlying assets. Any notes that were imported into Pakistan from India after that date simply would not count to the final tally. Pakistani disagreed. In March 1949 the Indian government informed the bank that "pending negotiations with the Pakistan Government further releases to them should be withheld." This was unfortunate news for the SBP. It had effectively issued Pakistani rupees without a reciprocating asset to back them.* That's where the two parties stand to this day—the SBP grudgingly holds the RBI's IOU on its books as reminder that it never got its perceived fair share of the RBI's assets.
---
This sort of havoc is inevitable when a monetary union breaks up. If existing notes are to be converted into new national notes at a one-to-one basis over a fixed period of time, then everyone has an incentive to export their notes to the region that is expected to have the strongest national currency. I am speculating here, but in September 1949—just three months after the RBI had been successfully divided—India devalued its rupee by 30.5%. Pakistan didn't. So all thoe holding Pakistani rupees were suddenly 30.5% richer than those holding rupees. Maybe the mass banknote exodus into Pakistan during the conversion period was an attempt to avoid this impending devaluation.

This same sort of dynamic would surely characterize a euro break-up. If Europeans are given 6-months to convert their euros into new national currencies like the German mark or the Greek drachma, you can bet that everyone will ship their euros to Germany. Drachmas, like the Indian rupee, are sure to be devalued. And if the final distribution of banknotes is to serve as the marker for divvying up the European Central Bank's assets, then Germany would get most of them. Were it to be prevented from getting its share, then Germany would end up in the same situation as Pakistan, with a shortage of good assets to back up all the fresh marks it has issued.

*If you're interested in specific amounts owed, here's an old World Bank document on the issue.