3:39 AM
Deja Vu In Turkey: Currency Crisis and Corporate Insanity! - Hello Friends as always i would invite you to join and Promote one of the world's premier top rated investment companies and pioneers in alternative assets: market investment in and purchasing of alternative asset classes including gold, precious metals, Bitcoin and other cryptocurrency for direct purchase investors, the vast US market of IRA, 401k and other retirement account holders, the Canada market for RRSP and TFSA holders (precious metals), high net worth individuals and families (HNWI), and more. Mutl-trillion dollar potential market with one of the highest paying affiliate programs in the world.

Disclosure: The owner(s) of this website may be paid to recommend Regal Assets. The content on this website, including any positive reviews of Regal Assets and other reviews, may not be neutral or independent.
This has been a year of rolling crises, some originating in developed markets and some in emerging markets, and the market has been remarkably resilient through all of them. It is now Turkey's turn to be in the limelight, though not in a way it hoped to be, as the Turkish Lira enters what seems like a death spiral, that threatens to spill over into other emerging markets. There is plenty that can be said about the macro origins of this crisis, with Turkey's leaders and central bank bearing a lion's share of the blame, but that is not going to be the focus of this post. Instead, I would like to examine how Turkish business practices, and the willful ignorance of basic financial first principles, are making the effects of this crisis worse, and perhaps even catastrophic.
The Turkish Crisis: So far!
The Turkish problem became a full fledged crisis towards the end of last week, but this is a crisis that has been brewing for months, if not years. It has its roots in both Turkish politics and dysfunctional practices on the part of Turkish regulators, banks and businesses, and has been aided and abetted by investors who have been too willing to look the other way. The most visible symbol of this crisis has been the collapse of the Turkish Lira, which has been losing value, relative to other currencies, for a while, capped off by a drop of almost 15% last Friday (August 10):
While it is undoubtedly true that the weaker Lira will lead to more problems, currency collapses are symptoms of fundamental problems and for Turkey, those problems are two fold. One is a surge in inflation in the Turkish economy, which can be seen in graph below:

While it easy to blame the Turkish central bank for dereliction of duty, it has been handicapped by Turkey's political leadership, which seems intent on making its own central bank toothless. Rather than allow the central bank to use the classic counter to a currency collapse of raising central bank-set interest rates, the government has put pressure on the bank to lower rates, with predictable (and disastrous) consequences.

Corporate Finance: First Principles
I teach both corporate finance and valuation, and while both are built on the same first principles, corporate finance is both wider and deeper than valuation since it looks at businesses from the inside out. i.e., how decisions made a firm's founders/managers play out in value. In my introductory corporate finance class, I list out the three common sense principles that govern all businesses and how they drive value: 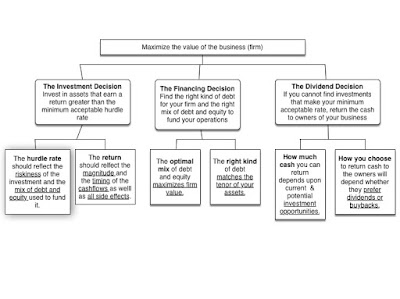 The financing principle operates at the nexus of investing and dividend principles and choices you make on financing can affect both investment and dividend policy. It is true that when most analysts look at the financing principle, they zero in on the financing mix part, looking at the right mix of debt and equity for a firm. I have posted on that question many times, including the start of this year as part of my examination of global debt ratios, and have used the tools to assess whether a company should borrow money or use equity (See my posts on Tesla and Valeant). There is another part to the financing principle, though, that is often ignored, and it is that the right debt for a company should mirror its asset characteristics. Put simply, long term projects should be funded with long term debt, convertible debt is a better choice than fixed rate debt for growth companies and assets with cash flows in dollars (euros) should be funded with dollar (euro) debt. The intuition behind matching does not require elaborate mathematical reasoning but is built on common sense. When you mismatch debt (in terms of maturity, type or currency) with assets, you increase your likelihood of default, and holding debt ratios constant, your cost of debt and capital.

In effect, your perfect debt will provide you with all of the tax benefits of debt while behaving like equity, with cash flows that adapt to your cash flows from operations.

There are two ways that you can match debt up to assets. The first is to issue debt that is reflective of your projects and assets and the second is to use derivatives and swaps to fix the mismatch. Thus, a company that gets its cash flows in rupees, but has dollar debt, can use currency futures and options to protect itself, at least partially, against currency movements. While access to derivatives and swap markets has increased over time, a company that knows its long term project characteristics should issue debt that matches that long term exposure, and then use derivatives & swaps to protect itself against short term variations in exposure.

Turkey: A Debt Mismatch Outlier?
The argument for matching debt structure (maturity, currency, convertibility) to asset characteristics is not rocket-science but corporations around the world seem to revel in mismatching debt and assets, using short term debt to fund long term assets (or vice versa) and sometimes debt in one currency to fund projects that generate cashflows in another. In numerous studies, done over the decades, looking across countries, Turkish companies rank among the very worst, when it comes to mismatching currencies on debt, using foreign currency debt (Euros and dollars primarily) to fund domestic investments.
Lest I be accused of using foreign data services that are biased against Turkey, I decided to stick with the data provided by the Turkish Central Bank on the currency breakdown of borrowings by Turkish firms. In the chart below, I trace the foreign exchange (FX) assets and liabilities, for non-financial Turkish companies, from 2008 and 2018:
The numbers are staggeringly out of sync with  Turkish non-financial service companies owing $217 billion more in foreign currency terms than they own on foreign currency assets, and this imbalance (between foreign exchange assets and liabilities) has widened over time, tripling since 2008.
I am sure that there will be some in the Turkish business establishment who will blame the mismatching on external forces, with banks in other European countries playing the role of villains, but the numbers tell a different story. Much of the FX debt has come from Turkish banks, not German or French banks, as can be seen in the chart below:
In 2018, 59% of all FX liabilities at Turkish non-financial service firms came from Turkish banks and financial service firms, up from 39% in 2008. The mismatch is not just on currencies, though. Looking at the breakdown, by maturity, of FX assets and liabilities for Turkish non-financial service firms, here is what we see:
In May 2018, while about 80% of FX assets are Turkish non-financial firms are short term, only 27% of the FX debt is short term, a large temporal imbalance.

It is possible that the Turkish government may be able to put pressure on domestic banks to prevent them from forcing debt payments, in the face of the collapse of the lira, but looking at when the debt owed foreign borrowers comes due (for both Turkish financial and non-financial firms), here is what we see.
From a default risk perspective, though, the debt maturity schedule carries a message. About 50% of debt owed by Turkish banks and 40% of the debt owed by Turkish non-financial service companies will be coming due by 2020, and if the precipitous drop in the Lira is not reversed, there is a whole lot of pain in store for these firms.
Rationalizing the Mismatch: The Good, The Dangerous and the Deadly
Turkish firms clearly have a debt mismatch problem, and the institutions (government, bank regulators, banks) that should have been keeping the problem in check seem to have played an active role in making it worse. Worse, this is not the first time that Turkish firms and banks will be working through a debt mismatch crisis. It has happened before, in 1994, 2001 and 2008, just looking at recent decades. If insanity is doing the same thing over and over, expecting a different outcome, there is a good case to be made that Turkish institutions, from top to bottom, are insane, at least when it comes to dealing with currency in financing. So, why do Turkish companies seem willing to repeat this mistake over and over again? In fact, since this mismatching seems to occur in many emerging markets, though to a lesser scale, why do companies go for currency mismatches? Having heard the rationalizations from dozens of CFOs on every continent, I would classify the reasons on a spectrum from acceptable to absurd.
Acceptable Reasons
There are three scenarios where a company may choose to mismatch debt, borrowing in a currency other than the one in which it gets its cash flows.
In all three cases, though, once the money has been borrowed, the company that has mismatched its debt should turn to the derivatives and swap markets to reduce or eliminate this mismatch.
Dangerous Reasons
There are two reasons that are offered by some companies that mismatch debt that may make sense, on the surface, but are inherently dangerous:
Bad Reasons
I am surprised by some of the arguments that I have heard for mismatching debt, since they suggest fundamental gaps in basic financial and economic knowledge.
The Fix
It is too late for Turkish companies to fix their debt problem for this crisis, but given that this crisis too shall pass, albeit after substantial damage has been done, there are actions that we can take to keep it from repeating, though it will require everyone involved to change their ways:
I don't think any of these changes will happen overnight but unless we change our behavior, we are designed to replay this crisis in other emerging markets repeatedly.
YouTube Video