Did Brexit break the banknote?

1:36 AM
Did Brexit break the banknote? - Hello Friends as always i would invite you to join and Promote one of the world's premier top rated investment companies and pioneers in alternative assets: market investment in and purchasing of alternative asset classes including gold, precious metals, Bitcoin and other cryptocurrency for direct purchase investors, the vast US market of IRA, 401k and other retirement account holders, the Canada market for RRSP and TFSA holders (precious metals), high net worth individuals and families (HNWI), and more. Mutl-trillion dollar potential market with one of the highest paying affiliate programs in the world.

Why does a nation's cash in circulation generally grow consistently from one year to the next? While economies do experience the odd recession, in general they are always improving. Improving economies coincide with more demand to make transactions, and for this the public needs to have greater amounts of cash on hand. There is a counter-cyclical element to cash holdings. When recessions occur, people often turn to unofficial sectors of the economy to make a living, and this often requires cash. The last explanation for the steady growth in cash outstanding is inflation. Let's assume an inflation rate of 10%. Someone who generally hold $10 worth of purchasing power in their wallet in 2018 will have to hold $11 in 2019 if they want their situation to stay the same. To meet that demand, the central bank has to print more banknotes.

All of this is why the UK's recent flirtation with decashification is so strange. Below is a chart showing the year-to-year change in British paper currency in circulation: 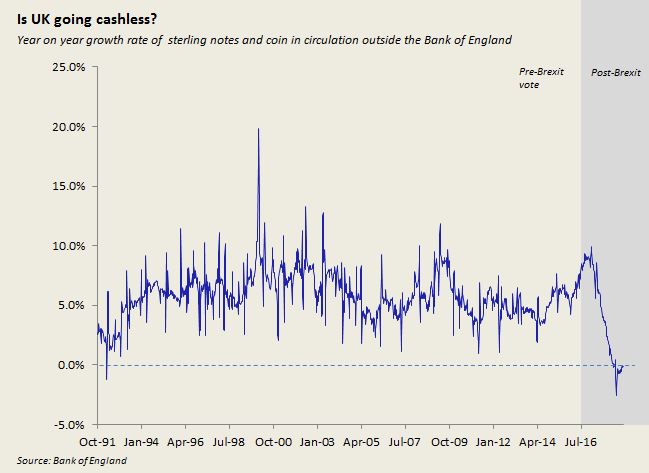 For eight months now, since February 2018, the stock of Bank of England banknotes has been registering below the previous year's count, a phenomenon that Britain has never seen (at least not since the start of the data series I found).

One potential explanation for the recent bout of decashification is increased debit and credit card usage. I am not entirely convinced by this argument. People's transactional habits are notoriously slow to change. When the inevitable card-induced decline in cash does occur, it won't suddenly occur in the space of eight or nine months, but will take place over an extended multi-year period. As in the UK, card usage in Canada is ubiquitous, yet we haven't seen the same sort of effect on the stock of cash. Something unique seems to be occurring in the UK.

The UK has been switching to polymer notes recently, the new £10 being introduced in 2017 and the £5 in 2016. Old paper versions can no longer be spent. The £20 is slated for a switch in 2020. Perhaps this is creating havoc with people's money holding patterns? I suppose it's possible, but here in Canada we went through the whole polymerization process without a hiccup. (See chart here). So I don't see why the UK would experience any sort of discontinuities during its own changeover.

The answer can only have something to do with Brexit. One possibility is that Brexit has reduced immigrant inflows and encouraged outflows, and immigrants are large users of cash. Ipso facto, cash-in-circulation has declined. The problem with this explanation is you'd need really large changes in migrations flows to see that sort of pattern in cash demand, and I am skeptical we're seeing that sort of upheaval.

Another Brexit-based explanation is that Brexit has broken the banknote. British banknotes have suffered a massive credibility shock. All those paper pounds hoarded away under Brits' mattresses, or in criminal vaults, or in foreign pockets, are just not as trustworthy as they were before. So they are being quickly spent or exchanged for other paper, say euros. Eventually these unwanted notes are resurfacing back in the UK where the Bank of England is forced to suck them back up and destroy them.This paints a particularly dour picture. It says that the Bank of England's seigniorage revenues have been permanently damaged, the short-fall having to be made up by the British taxpayer. It makes one worry about potential long-term damages to the Bank's ability to effect an independent monetary policy.

Having had some time to think about this, I think I've got a better story. The changes are indeed Brexit-induced. But the big decline we've seen over the last year isn't a sign of distrust in paper pounds. Rather, it's a reversion to trend. More specifically, the decline in cash-in-circulation so far this year is actually the unwinding of an unusual surge in cash-in-circulation that began in early 2016. Check out the chart below: 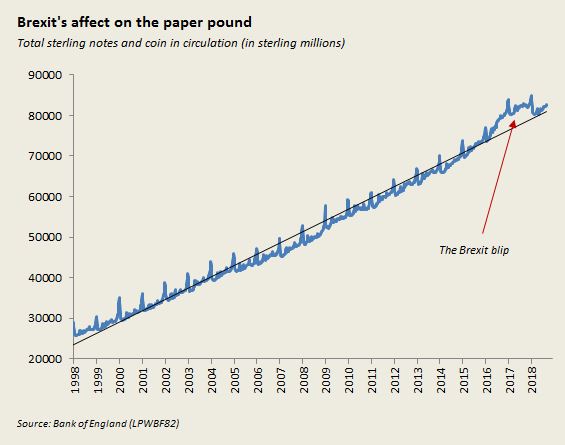 Beginning in 2016, as the political competition in the leadup to the Brexit vote intensified, banknotes-in-circulation suddenly started to rise relative to long-term trend line growth (black line). This was the fastest rate at which banknotes in circulation had increased since the 2008 credit crisis. The Bank of England's blog, Bank Underground, commented on the surge in banknote demand back in 2016.

The sudden demand to hold more cash continued through the June 23, 2016 vote into early 2017. I suspect that this was a symptom of an underlying uncertainty shock spreading through the UK economy. Brits were growing increasingly worried about the effects of Brexit. Perhaps they wanted to hold fewer deposits, or have less exposure to assets like stocks and real estate. Cash is a coping mechanism. In uncertain times it one of the few assets that offers the combination of short-term price certainty and the ability to be mobilized in an instant.

This chart from the Bank of England shows that the demand for the the £50 note (pink line) was particularly marked in 2016:


But by mid to late-2017, Brexit-related uncertainty began to subside, and cash began to be redeposited into the banking system. UK cash usage has now returned to the long-term trendline growth rate. Going forward, I'd expect the year-to-year change in cash outstanding to return to its habitual 5%-ish per year. That is, absent more Brexit-induced panics.

That's odd. For most of 2018, there has been no year-over-year growth in the quantity of UK banknotes in circulation. Going back to 1998, this sort of sustained lull in cash demand has never happened. What's going on? Less crime? pic.twitter.com/PXv53oB4E7
— JP Koning (@jp_koning) July 18, 2018