2:10 AM
The demonetization gap - Hello Friends as always i would invite you to join and Promote one of the world's premier top rated investment companies and pioneers in alternative assets: market investment in and purchasing of alternative asset classes including gold, precious metals, Bitcoin and other cryptocurrency for direct purchase investors, the vast US market of IRA, 401k and other retirement account holders, the Canada market for RRSP and TFSA holders (precious metals), high net worth individuals and families (HNWI), and more. Mutl-trillion dollar potential market with one of the highest paying affiliate programs in the world. 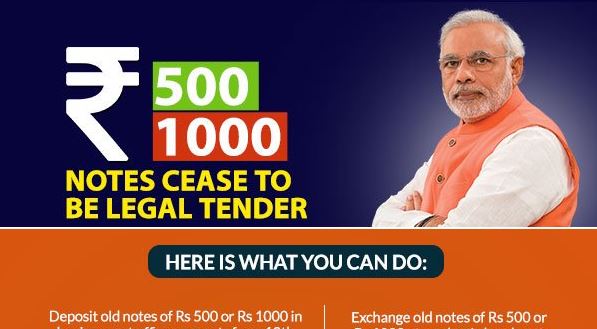 Two years ago, Indian PM Narendra Modi suddenly demonetized all of the nation's ₹1000 and ₹500 banknotes. His stated goal was to exact justice on all those holding large amount of dubiously-earned cash. But since these two denominations constituted around 85% of India's currency supply, the demonetization immediately threw the entire nation into chaos.

After suffering from a nine-month note shortage, enough new notes were printed to meet India's demand for cash. But in the interim, what had happened to Indians' demand for cash? Did their experience with demonetization lead them to hold less cash than before, or did they simply revert to their pre-demonetization habits and patterns? I wrote an article in September 2017 dealing with these questions. With another year having passed we now have more data—so I'm going to provide quick update.

My claim is that a demonetization gap continues to exists. This gap is evidence that the cancellation of ₹1000 and 500s has had an enduring effect on Indians' behaviour surrounding cash.

To measure the gap, we need to compare the evolution of India's cash supply to the path it would have taken in a world in which Modi's demonetization never occurred. We know that the supply of rupee banknotes grew at an average rate of around 12.3% from 2011 to 2016, and on the eve of demonetization there were around ₹17.5 trillion in banknotes and coins in circulation. Taking these numbers and extrapolating forward, November 2018's cash-in-circulation count would have clocked in at around ₹21.5 trillion rupees had the demonetization not occurred. But in our actual world, the one where demonetization occurred, India's cash count registers at just ₹19.5 trillion rupees.

So thanks to demonetization, Indians are holding around ₹2 trillion fewer paper rupees than they otherwise would have. I've illustrated the demonetization gap below:

Today is the two-year anniversary of Modi's rather inept demonetization.

Interestingly, the demonetization gap—the difference between India's current banknote count and where it probably would have been without demonetization—is still quite large... pic.twitter.com/DvUnOlEjim
— JP Koning (@jp_koning) November 8, 2018


What sort of assumptions do we need to make in order for the demonetization gap to be zero? Let's say that demonetization had never occurred. To get from a currency stock of ₹17.5 trillion in November 2016 to ₹19.5 trillion by November 2018, we need to assume an absurdly low 6% growth rate for the stock of currency stock. I doubt India has ever experienced such a slow growth rate in cash-in-circulation. So while you can quibble with the size of the gap, I think it's undeniable that some sort of gap exists i.e. demonetization has had long lasting effects on cash holdings.

There are two potential explanations for why a demonetization gap exists. My guess is that both are to some extent true, although as time passes the influence of the second will tend to disappear:

1. Demonetization might have had a permanent effect on Indians' taste for cash. Prior to demonetization, a money launderer might typically have built up an inventory of ₹100 lakh (US$135,0000) worth of banknotes before laundering them. But the demonetization frightened him, so now he launders his ill-gotten gains whenever he holds just ₹50 lakh worth of notes.

Or maybe a family that typically conducted most of their day-to-day transactions in cash opened a bank account during demonetization so that they could deposit their notes. And now they've fallen into the habit of paying for half their family expenses with cash, and the other half with debit cards.

These sorts of changes to transactions preferences would get expressed in the nation's overall stock of notes by a reduction relative to trend.

2. Demonetization might have caused large and lasting damage to the informal sector of the Indian economy. With 85% of the nation's money stuck suddenly came unusable, and so many businesses dependent on cash, these businesses may have been forced to go under. With informal production cratering, fewer banknotes would be required for transactions purpose than would otherwise be the case. Over the long term, however, one would expect these sectors to rebuild, any drag they had once placed on cash demand being removed.

If Indian's taste for cash changed, how might these new tastes have manifested themselves? Did Indians swap cash for deposits in the regulated banking system or did they simply swap one form of anonymous "black money" for another (i.e. cash for gold, diamonds, real estate)? In my post from last September I found some interesting charts. I'm going to update them below. 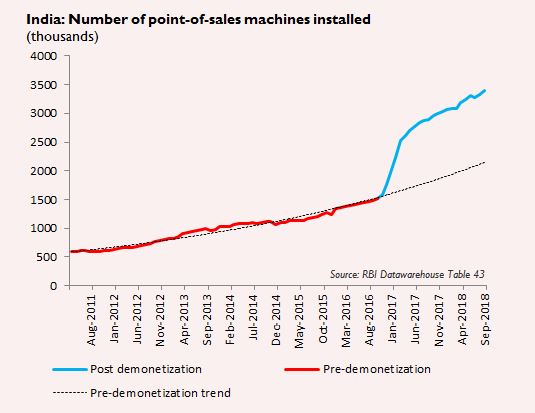 As the chart above illustrates, the number of point-of-sale (POS) terminals installed has experienced a one-time shot to the arm after the November 2016 demonetization announcement.

The second chart shows that the value of POS transactions using debit and credit cards moved to a new and higher plateau. 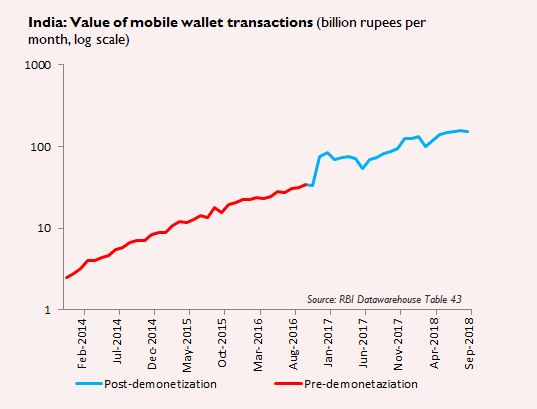 The last chart shows the growth in value transacted using mobile wallets. Demonetization gave mobile wallet usage a quick shot to the arm, but it is difficult to determine if growth stayed above trend in 2017-18 or below. Given that mobile wallets are recent and started from a very low base, usage had already been growing very fast before demonetization.

In any case, I think the charts provide at least some evidence that the shift out of cash has been captured by digital finance.

---------------
The existence of a demonetization gap does not mean that Modi's effort was a success. If someone comes up with a great monetary innovation, expect it to be quickly copied. Polymer banknotes, real-time gross settlement systems, and inflation targeting are all examples of monetary technologies that have spread from their original adopter to the rest of the world. But not a single nation has copied India's demonetization. I would be surprised if any ever do. The costs imposed by the event—lost labour time, foregone transactions, chaos—were all too apparent, and its benefits dubious.

That being said, I sympathize with the intuition that was at the core of Modi's demonetization. Let's face it, plenty of people use cash as a way to avoid taxes. These cheats force everyone else to pay more than their fair share for shared infrastructure. It would be nice if there was a way to rebalance the load by taking back resources lost to the cheats. A classic way to fix this problem is to have the tax department hire more inspectors. An alternative is to design the nation's cash system in a way that corrects for any unfairness. Modi's demonetization is an example of the second approach, a massive cash dragnet designed to flush out cheats.

But it was an incredibly clumsy effort. The tricky thing with cash is that it is simultaneously a vessel for tax evasion for a few cheats and also a vital monetary fluid for the many. Punishing the first group means that the second will also be hurt. If the costs incurred by the second group are too high, then the calculus behind the whole effort fails.

Modi's demonetization tried to lessen the blast radius by targeting users of large denomination ₹500 and ₹1000 notes while leaving users of the ₹10, ₹20, ₹50, ₹100, and ₹200 untouched. The motivation behind this was that presumably large tax cheats will concentrate their cash holdings in higher denomination notes, while regular note users will tend to concentrate in the lower denominations. But even with this filter in place, the ₹500 and ₹1000 were so widely held by Indians that the demonetization of these denominations forced a large proportion of the population to endure massive lineups for weeks. Retail trade ground to a halt.

Over the last two years I suggested a few ideas that would have improved the effectiveness of Modi's demonetization. Instead of targeting all ₹500s and ₹1000 notes, demonetizing notes by serial number would have resulted in a much smaller blast radius. Rather than withdrawing ₹500s and ₹1000s, it would have been easier to overstamp them with stickers, and then slowly withdraw these overstamped notes over time. This would have helped prevent massive cash shortages.

But even after these modifications, demonetization is too blunt of a tool to effectively solve the complicated inequities arising from cash-based tax evasion. So should Indians (and the rest of us too) simply live with these imperfections, accepting unfairness as an acceptable cost of maintaining cash systems?

Maybe not. In his paper Taxing Cash, Ilan Benshalom has suggested a less invasive technique for reclaiming resources from cash-using tax evaders. Rather than demonetizing all ₹500 and ₹1000s, Modi could have introduced a recurring withdrawal fee of ₹10 for each ₹500 note and a ₹20 rupee fee on each ₹1000 note.

Imagine that Rohit needs to pay Indira ₹10 lakh. The two can avoid taxes if they agree to transact using cash rather than making a digital payment. So Rohit withdraws one thousand ₹1000 bills from his bank. He incurs a fee of ₹20,000 (₹20 for each note), the bank forwarding the full amount to the government. Rohit might consider avoiding the withdrawal tax by withdrawing ₹50s and ₹100s (which don't incur fees), but he is unlikely to go this route since ₹10 lakh in small denomination notes would be terribly awkward.

The upshot is that Indian tax payers would get ₹20,000 in compensation for Rohit and Indira's evasion of taxes. Compared to Modi's demonetization, the blast radius of a large denomination withdrawal tax is much smaller. Regular Indians could have easily continued about their business using untaxed ₹100s or migrating to digital payments. It sounds promising, but after Modi's explosive demonetization, Indians are probably much less open to new monetary experiments, and who can blame them.


There are several other ways to visualize Indian demand for cash over time. For instance, here is the cash-to-GDP ratio: 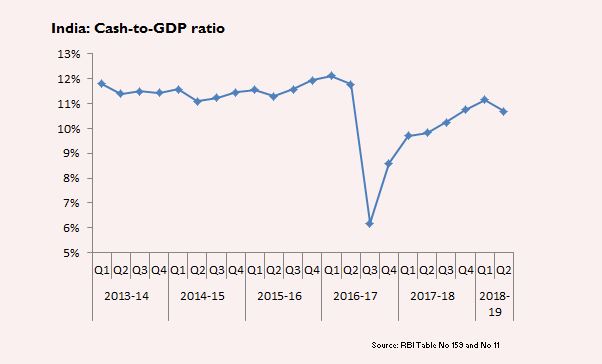 The idea here is that for each unit of GDP, some amount of cash is used as means of circulating production. (Note: While the cash-in-circulation numbers are current, 2018 Q2 nominal GDP has still not been published. I estimated it by assuming 11.5% nominal growth, the average growth rate over the last few years.)

Vivek Dehejia and Rupa Subramanya measure the ratio of cash-in-circulation to the total money stock, or M3. They find little evidence of a reduced reliance on cash. For the chart below, I've used M4 which includes not only chequing and savings deposits held at banks but also total postal office deposits: