9:25 AM
Data Around Jobs Suggests Continued Economic Growth - Hello Friends as always i would invite you to join and Promote one of the world's premier top rated investment companies and pioneers in alternative assets: market investment in and purchasing of alternative asset classes including gold, precious metals, Bitcoin and other cryptocurrency for direct purchase investors, the vast US market of IRA, 401k and other retirement account holders, the Canada market for RRSP and TFSA holders (precious metals), high net worth individuals and families (HNWI), and more. Mutl-trillion dollar potential market with one of the highest paying affiliate programs in the world.

Disclosure: The owner(s) of this website may be paid to recommend Regal Assets. The content on this website, including any positive reviews of Regal Assets and other reviews, may not be neutral or independent.
The NFIB Small Business Optimism Index released this morning was largely a positive report in my view with the Index reported at 103.1, but down 1.6 points. The Index level remains in the top 15% of readings for the Optimism Index. Where the report shows weakness it is mostly in the expectations areas. For example, the survey notes, "optimism slipped because fewer owners said they expect [emphasis added] better business conditions and real sales volumes in the coming months." Related to expectations was NFIB President and CEO, Juanita Duggan expressing in the report,

In other words it would seem the drumbeat of negativity and talk of a recession is impacting expectations and sentiment. These are a few examples how the economy can get talked into a recession. 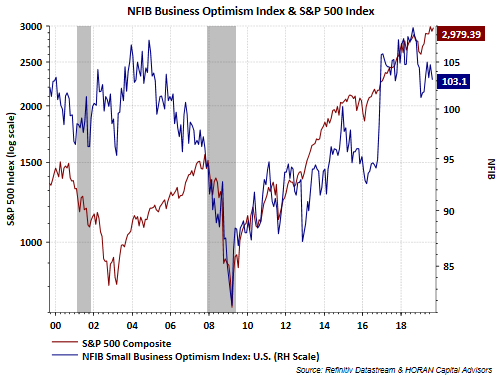 Later in the morning the Job Openings and Labor Turnover Survey (JOLTS) was released showing job openings were essentially unchanged at 7.2 million versus the prior month. Openings were down about 225,000 for the same period a year earlier, July 2018. 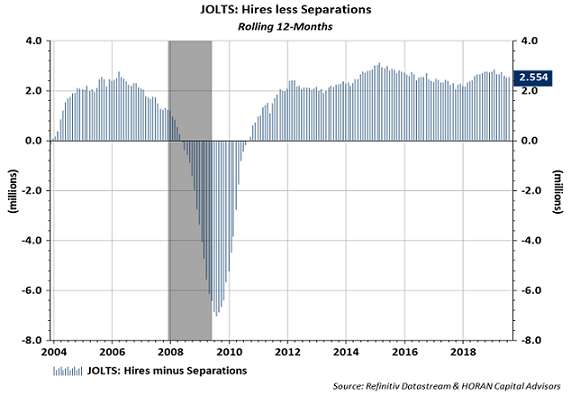 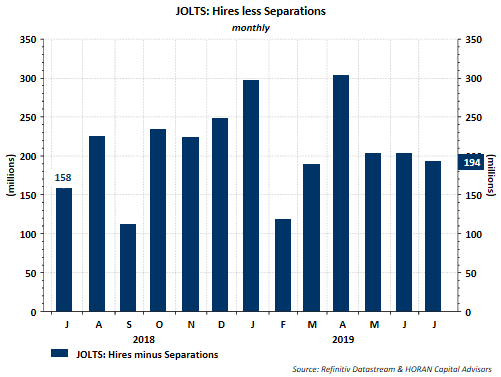 As noted in the JOLTS report net employment change results from the relationship between hires and separations:
And finally, back to the NFIB Survey, a record 27% of those surveyed indicated difficulty in finding qualified workers as their number one problem. In total, of those surveyed, 57% reported they had few or no qualified applicants for positions they were trying to fill as seen in the top pane in the below chart. 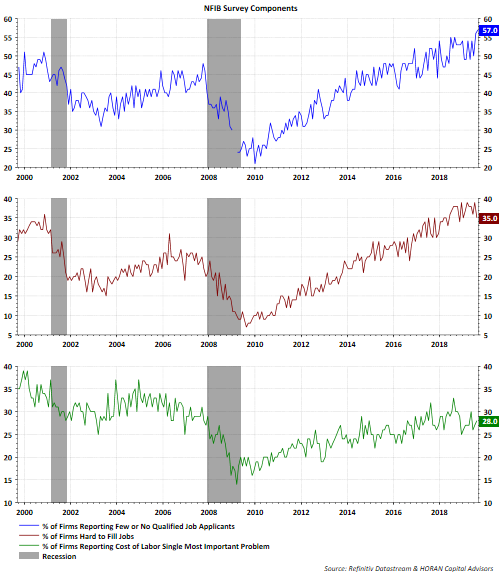 This data around the job market represents current activity and not expectations. Based on the JOLTS and the NFIB Survey, it seems the job market is certainly tight/strong. It is difficult to image an economy tipping into a recession with this kind of survey data around the job market. I believe much of the angst for the U.S. economy is being influenced by the commentary or headlines around a potential recession. It is possible the U.S. is becoming less synchronized with economies overseas and thus the U.S. can continue to grow in spite of some slower economies abroad. Maybe the U.S. grow is not above trend, but growth nonetheless.