7:49 PM
Stephen Poloz needs to be honest with Canadians about negative interest rates - Hello Friends as always i would invite you to join and Promote one of the world's premier top rated investment companies and pioneers in alternative assets: market investment in and purchasing of alternative asset classes including gold, precious metals, Bitcoin and other cryptocurrency for direct purchase investors, the vast US market of IRA, 401k and other retirement account holders, the Canada market for RRSP and TFSA holders (precious metals), high net worth individuals and families (HNWI), and more. Mutl-trillion dollar potential market with one of the highest paying affiliate programs in the world.

To soften the blow of the COVID-19 pandemic, the Bank of Canada is running what it sees as an expansionary, or loose, monetary policy. I think an expansionary policy makes a lot of sense.

The problem is this. The Bank of Canada has several tools it can use to loosen. Some are better than others. But it has stopped trying to use its best tool.

What is its best tool? Well, there are three ways that the Bank of Canada can loosen monetary policy.

Say interest rates are at 4%. Stephen Poloz, the Governor of the Bank of Canada, can either...

1) Cut the interest rate, say to 3.75%
2) Keep rates at 4% but do $20 billion or so in quantitative easing. This is just a fancy term for buying up assets like government bonds.
3) Keep rates at 4%, but promise to maintain them at 4% for extra-long. This is known as forward guidance.

Let me explain the third, forward guidance, because it's complicated. Basically, Poloz says that he will keep the Bank of Canada's interest rate at 4%, but promises to maintain it at that level for longer than would otherwise be warranted. The intuition here is that by committing to keep interest rates extra loose in the future, he can loosen monetary policy now.

I like to think about forward guidance in terms of raising children. Say that I want to modify the behaviour of my three-year old kid. To do so I might reward him with an M&M. Unfortunately I don't have any M&Ms on me. So I promise to give him an extra M&M after the next trip to the grocery store. Hopefully this "guidance" about future M&Ms is enough to get him to do what I want, now.

So which of these three is the Bank of Canada's best tool?

The Bank of Canada's actual behaviour over the last few decades hints at what tool it considers to be the most useful. In 99% of the cases, it has chosen to loosen policy by dropping interest rates, not by embarking on quantitative easing or forward guidance. It usually does so in 0.25% increments, but when the economic shock is large, it'll resort to large interest rate cuts. For instance, after 9/11 it chose a 0.5% reduction.

What about the current episode? The Bank of Canada describes the coronavirus fallout as "unprecedented". In its recent monthly monetary policy report, the Bank says that the severity of the current shocks has inspired it to roll out a "bold policy response."

But if the Bank's policy response is so bold, why has it stopped using its favorite monetary policy tool? Having reduced interest rates to 0.25%, the Bank of Canada says it won't drop them anymore. According to Poloz, interest rates now sit at Canada's "effective lower bound." The implication of his  phrasing is that not even a force of nature could move rates below 0.25%.

Don't take it from me. In this 2015 Bank of Canada working paper, researchers Jonathan Witmer and Jing Yang estimate that the Canadian effective lower bound is likely between -0.25% and -0.75%, with a midpoint estimate of -0.5%. Canada would hardly be unique if it went into negative interest rate territory. Other countries have tried negative rates, including Switzerland, Sweden, Denmark, and the European Union. 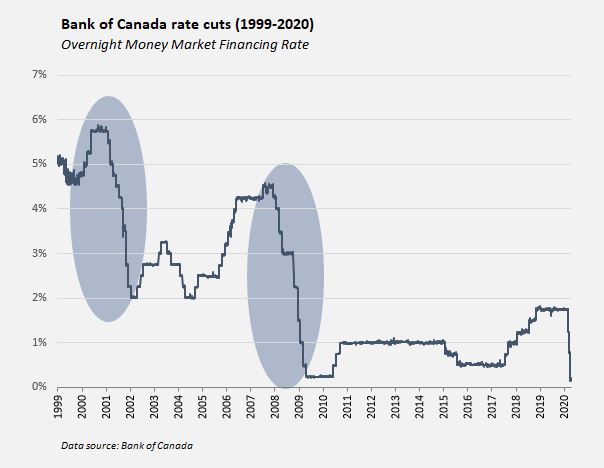 The problem is that quantitative easing doesn't do much. It sounds big and hefty. But in actuality, big purchases of government bonds are a bit like trying to move a jet plane with a fan. They're certainly no substitute for another rate cut.

As for forward guidance, the Bank of Canada hasn't announced it yet. But any parent knows that a promise of future M&Ms just isn't good as M&Ms in the present. Kids are skeptical of promises, and for good reason.

Stephen Poloz has described negative rates as "not sensible". Here's what is not sensible. We are currently in the midst of the fastest slowdowns in Canadian history, and the Bank of Canada staidly refuses to even consider the possibility of using its favorite and most effective instrument; interest rate cuts. I'm not saying that another rate cut is warranted. But Poloz should at least unshackle his best tool.


P.S. I've been down this rabbit-hole before.

In that post, I speculate why Canadian policy makers seem loath to consider further rate cuts into negative territory.

Look, Canadian regulators have always had a close working relationship with the big banks. This certainly had its benefits. But here we are seeing one of its drawbacks. Canada's big banks are conservative and afraid of change. They probably don't want to incur the frictional costs associated with transitioning to a negative rate environment. And they have probably voiced their concerns to the Bank of Canada. And so the Bank is supporting the banks by declaring the effective lower bound to be at 0.25%. This decision comes at the expense of all Canadian citizens. We all benefit from the ongoing usage of the Bank of Canada's strongest tool: variations in the rate of interest. QE and forward guidance are poor fill-ins.

P.P.S. I just stumbled on Luke Kawa's series of tweets from a few weeks back on the topic of the Bank of Canada's effective lower bound. He captures my thoughts too.

Imagine if the Fed came out of nowhere and dropped a bombshell that it lost 75 basis points of policy space without even acknowledging it.
— Luke Kawa (@LJKawa) March 27, 2020