11:21 PM
Tesla's S&P 500 Inclusion Part 3: The Final Chapter - Hello Friends as always i would invite you to join and Promote one of the world's premier top rated investment companies and pioneers in alternative assets: market investment in and purchasing of alternative asset classes including gold, precious metals, Bitcoin and other cryptocurrency for direct purchase investors, the vast US market of IRA, 401k and other retirement account holders, the Canada market for RRSP and TFSA holders (precious metals), high net worth individuals and families (HNWI), and more. Mutl-trillion dollar potential market with one of the highest paying affiliate programs in the world.

Disclosure: The owner(s) of this website may be paid to recommend Regal Assets. The content on this website, including any positive reviews of Regal Assets and other reviews, may not be neutral or independent.
Previous installments:
Options market and delta hedging knowledge:
Table of Contents:

I finished writing about half of this post, and then as I came to better understand what transpired on Friday, I deleted everything, and now I am starting again from scratch.

I stayed up for 36 hours straight from Friday morning Singapore time to Saturday night Singapore time, and I've spent 80-90% of my time on TSLA since the S&P announcement. Moreover, I spent basically 100% of my time on TSLA during the first week after the announcement and during this past week leading up to the inclusion. For the next six months, I'm probably going to be swamped after my INSEAD MBA program starts in two weeks, and I could really use a break before then, but with a bunch of real-life stuff that needs taking care off, I'm not sure if I'll manage to fit in any off-time.

Basically, I'm quite exhausted and busy, so with all of this in mind, I'm going to keep this as brief as possible.

TSLA traded fairly steadily for most of Friday. There was likely some buying, speculating, and profit taking during the first two hours, but after that the day was pretty uneventful until 3PM. The explanation of what started the events around 3PM likely lies in something pointed out by Sudre on TMC:

During Friday, I was on the phone with IBKR for half of the day, because I needed to ask them if I could hold my ITM $650 18Dec call options until expiration, so that I could sell them during the final minutes before market close. However, because the position was too large for me to exercise, IBKR wouldn't let me hold it until expiration no matter what, and they told me they would liquidate it automatically around 3:45PM. As a result, I closed out the position myself throughout the day, luckily enough before the 3PM events started.
What Sudre is referring to in his post is the time that Robinhood starts to liquidate ITM options positions of its users, who have insufficient margin to exercise those options. This time turns out to be around 3PM. MMs (market makers) then sell delta hedge shares associated with the liquidated positions, which puts downward pressure on the stock price. It's likely that similar things happened at other brokers during the last hour of trading, and that eventually traders and panic sellers amplified these downward movements.
But likely the biggest contributor of all to the 3PM - 3:45PM drop was delta hedging, because there were likely still a lot of open ITM options positions that the MMs were delta hedging. As the price dropped, and these positions went OTM, MMs likely had to sell shares used to delta hedge these positions. Especially so close to expiration, the delta of near the money and ATM options changes very rapidly.
Another reason why it probably dropped so rapidly, between 3:30PM and 3:45PM specifically, is that most entities looking to play TSLA's S&P 500 inclusion should've already been positioned well ahead of time, so there might've been less money available to 'buy the dip'.
Before we talk about the final ten minutes of trading, it's useful to consider who might've bought the shares sold during 3:00PM and 3:50PM. It's hard to give a definitive answer about who the buyers were, but I'd guess they were mostly institutions who had information about what would transpire between 3:50PM and 4:00PM, and after 4:00PM. It's likely that, by this time, index funds had already placed their orders with their brokers for the closing cross. So it's likely that various brokers had an information advantage and heavily bought at those prices, planning to supply these shares to indexers during the cross and/or during AH.

Now, you might wonder what was up with the weird price action, and why it wasn't going up more, in spite of a large imbalance being reported at market prices. I think the following factors are what caused this:
I think these three factors explain the, at first sight, seemingly illogical price action during the final ten minutes.

Actual AH volume for these three stocks:
You can see that Market Chameleon is quite accurate for BABA, less so for AAPL, and not accurate at all for TSLA. I believe that it got tripped up by massive after hours block trades not at market prices, and did not count a lot of these. TSLA should've had the most of these block trades, AAPL less, and BABA not being in the S&P 500 very few.
Out of the 10.5M TSLA volume, it seems like ~7.5M was at normal market prices and ~3M at $695. Assuming the 36.5M missing volume is all at $695, that'd give 39.5M volume at $695 during after hours.

Looking at this after hours TSLA chart, it looks like the first hour consisted of a lot of people buying up shares to sell off to indexers at $695 in dark pools and block trades. I'd guess sellers were more people with call options expiring at $650-680 shorting the stock, or their brokers doing it for them, because they can exercise their options until 5:25-5:30PM.

If we revisit my model from part 2 of this series, account for the public offering, and update all the figures, we get this: 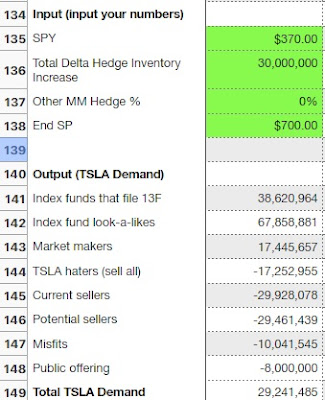 If this is more-or-less the end of the buying, my model predicted buying almost perfectly. My model predicted 38.6M + 67.9M = 106.5M, and actual buying ended up being 69.3M + 39.5M = 108.8M.
Although my model predicts that at this point in time supply should've been short by 29.2M shares, it's not inconceivable that these shares came from somewhere. It's possible that some shareholders have wanted to divest from TSLA for some time, but were waiting for 'the S&P inclusion bump' to do so. Jennison Associates LLC, and some of Capital World Investors funds, such as American Funds Insurance Series and New Perspective Fund, are good examples of this. These investors all have well over 5% of their AUM in TSLA, and might've been waiting for this opportunity to divest a little. If investors like this divested somewhat more than my model predicted, this could probably account for 10-20M shares.
Furthermore, there are the ~60M shares that went missing during Q3, which may have been scooped up by Softbank, Berkshire Hathaway, or some other entity. My model did not account for any sales from this potential mystery investor. If it exists, and it decided to sell (some) for a quick 100% profit @ $695, this could also help explain this 30M gap.

Where do we go from here?

Although the current $650-700 is near the bottom of where I expected TSLA could settle post-inclusion, I nonetheless converted all my options to shares at market open this Monday. My long-term options I would've sold months ago at $2,000-2,500 if not for the looming S&P inclusion, because they were so deep ITM that there was little upside left. My short-term options had grown into an uncomfortably large percentage of my portfolio, and 98% of them were expiring in 4 trading days.
There are a lot of reasons to be bullish on TSLA in the near-term:
But I nonetheless decided to sell my short-term options because:
All in all, I believe TSLA is a lot more likely to go up (slightly) than down over the next 3-6 months, but the next week is kind of a gamble at this point in my opinion, which is why I converted all my short-term calls to shares.

This marks the first time in ~19 months that I no longer hold any TSLA call options. I'm happy to hold 100% common stock now, because it'll be less stress, and it'll allow me to focus on my MBA next year and other more important things in my life.
I'll likely still follow Tesla, but I'll spend a lot less time on it. I think everything I laid out in my Tesla Investment Thesis 2.0 a year ago still holds true. I believe Tesla is still drastically undervalued, and I struggle to come up with scenarios where Tesla does not dominate transportation in 10-15 years. In my eyes, they'll be:
Going forward, I'll likely spend more time on other things, and less time on Tesla. For the time being, I think I'll only concern myself with changes to this long-term thesis. If something happens that significantly impacts this long-term thesis for the better or for the worse, I'll take note, but otherwise I'll just spend my time on things more important to me.
Personally, I can sleep well and be stress free, being invested in the future in the form of TSLA common stock, and knowing Elon and Tesla's amazing employees are doing their bests to make the world a better place.