Does it make sense to change your trading behaviour in different periods of volatility?

10:08 PM
Does it make sense to change your trading behaviour in different periods of volatility? - Hello Friends as always i would invite you to join and Promote one of the world's premier top rated investment companies and pioneers in alternative assets: market investment in and purchasing of alternative asset classes including gold, precious metals, Bitcoin and other cryptocurrency for direct purchase investors, the vast US market of IRA, 401k and other retirement account holders, the Canada market for RRSP and TFSA holders (precious metals), high net worth individuals and families (HNWI), and more. Mutl-trillion dollar potential market with one of the highest paying affiliate programs in the world.

A few days ago I was browsing on the elitetrader.com forum site when someone posted this:

I am interested to know if anyone change their SMA/EMA/WMA/KAMA/LRMA/etc. when volatility changes? Let say ATR is rising, would you increase/decrease the MA period to make it more/less sensitive? And the bigger question would be, is there a relationship between volatility and moving average?

Interesing I thought, and I added it to my very long list of things to think about (In fact I've researched something vaguely like this before, but I couldn't remember what the results were, and the research was done whilst at my former employers which means it currently behind a firewall and a 150 page non disclosure agreement).

Then a couple of days ago I ran a poll off the back of this post as to what my blogpost this month should be about (though mainly the post was an excuse to reminisce about the Fighting Fantasy series of books).

And lo and behold, this subject is what people wanted to know about. But even if you don't want to know about it, and were one of the 57% that voted for the other two options, this is still probably a good post to read. I'm going to be discussing principles and techniques that apply to any evaluation of this kind of system modification.

However: spolier alert - this little piece of research took an unexpected turn. Read on to find out what happened...

Why this is topical

This is particularly topical because during the market crisis that consumed much of 2020 it was faster moving averages that outperformed slower. Consider these plots which show the average Sharpe Ratio for different kinds of trading rule averaged across instruments. The first plot is for all the history I have (back to the 1970's), then the second is for the first half of 2020, and finally for March 2020 alone: 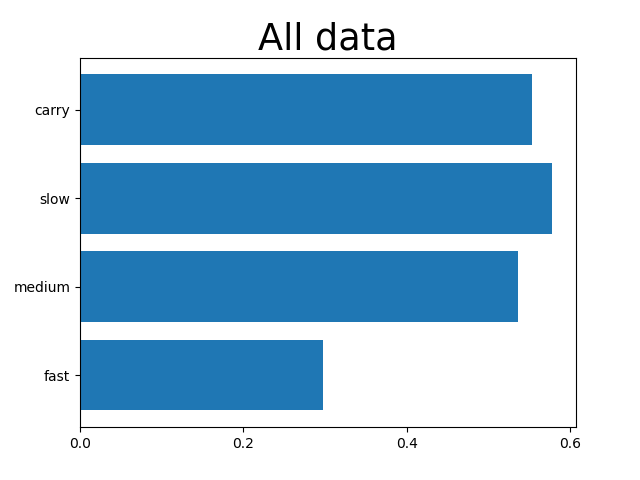 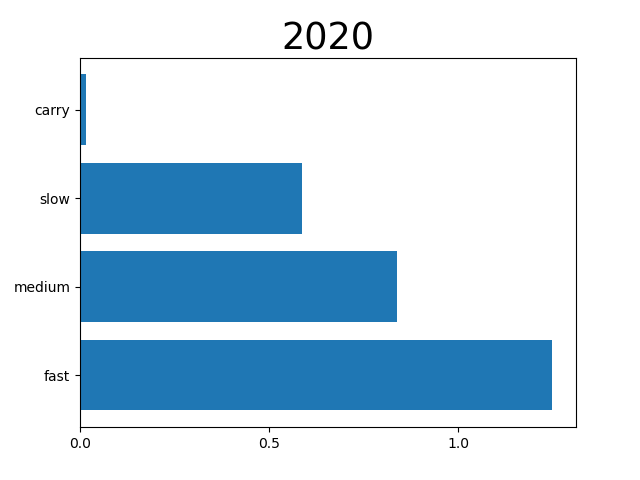 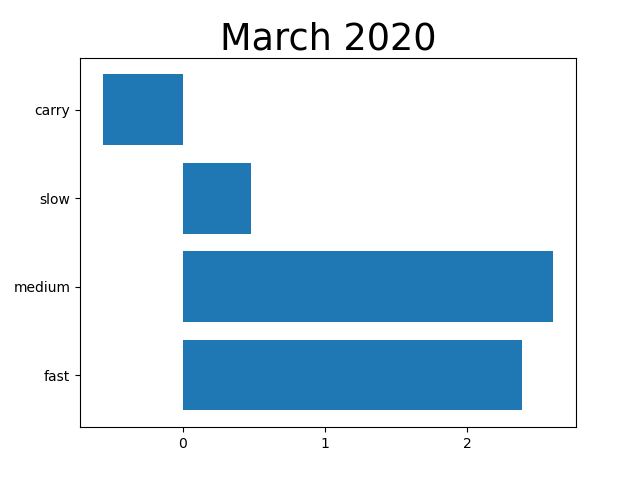 The pattern is striking: going faster works much better than it did in the overall sample. What's more, it seems to be confined to the financial asset classes (FX, Rates and especially equities) where vol exploded the most: 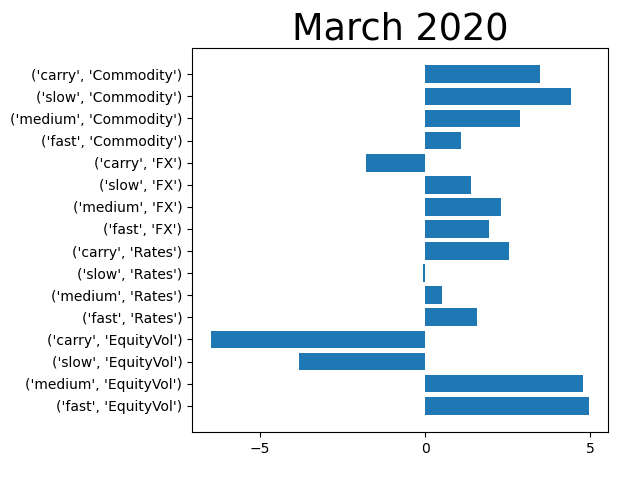 Furthermore, we can see a similar effect in another notoriously turbulent year: 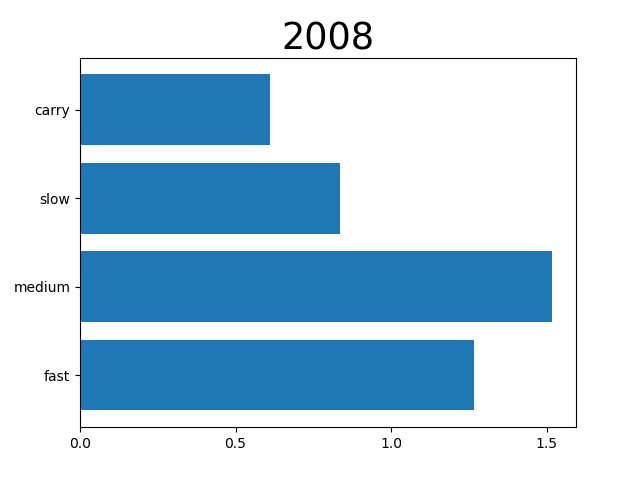 If we were sell side analysts that would be our nice little research paper finished, but of course we aren't... a few anecdotes do not make up a serious piece of analysis.

Rewriting the above in fancy sounding language, and bearing in mind the context of my trading system, I can write the above as:

Are the optimal forecast weights across trading rules of different speeds different when conditioned on the current level of volatility?

As I pointed out in my last post this leaves a lot of questions unanswered. How should we define the current level of volatility? How we define 'optimality'? How do we evaluate the performance of this change to our simple unconditional trading rules?

Defining the current level of volatility

For this to be a useful thing to do, 'current' is going to have to be based on backward looking data only. It would have been very helpful to have known in early February last year (2020) that vol was about to rise sharply, and thus perhaps different forecast weights were required, but we didn't actually own the keys to a time machine so we couldn't have known with certainty what was about to happen (and if we had, then changing our forecast weights would not have been high up our to-do list!).

So we're going to be using some measure of historic volatility. The standard measure of vol I use in my trading system (exponentially weighted, equivalent to a lookback of around a month) is a good starting point which we know does a good job of predicting vol over the next 30 days or so (although it does suffer from biases, as I discuss here). Arguably a shorter measure of vol would be more responsive, whilst a longer measure of vol would mean that our forecast weights aren't changing as much thus reducing the costs.

Now how do we define the level of volatility? In that previous post I used current vol estimate / 10 year rolling average of the  vol for the relevant. That seems pretty reasonable.

Here for example is the rolling % vol for SP500:

And here's the same, after dividing by 10 year vol: 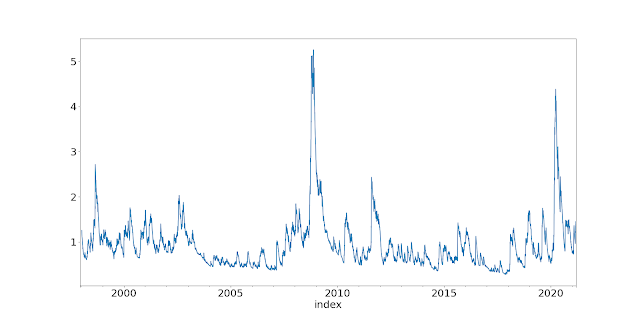 The picture is very similar, but importantly we can now compare and pool results across instruments.
What's immediately obvious is that this is a very skewed distribution. This is made clear if we stack up all the normalised vols across markets and plot the distribution:

Update: There was a small bug in my code that didn't affect the conclusions, but had a significant effect on the scale of the normalised vol. Now fixed. Thanks to Rafael L. for pointing this out. 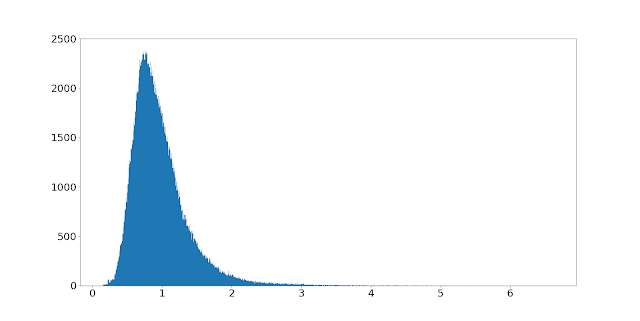 The mean is 0.98 - as you'd expect - but look at that right tail! About 1% of the observations are over 2.5, and the maximum value is nearly 6.7. You might think this is due to some particularly horrible markets (VIX?), but nearly all the instruments have normalised vol that is distributed like this.
At this point we need to think about how many vol regimes were going to have, and how they should be selected. More regimes will mean we can more closely fit our speed to what is going on, but we'd end up with fewer data points (I'm reminded of this post where someone had inferred behaviour from just 18 days when the VIX was especially low). Fewer data points will mean our forecast weights will eithier revert to an average, or worse take extreme values if we're not fitting robustly.
I decided to use three regimes:
There could be a case for making these regimes equal size, but I think there is something about relatively high vol that is unique so I made that smaller (with low vol the same size for symettry). Equally, there is a case for making them more extreme. There certainly isn't a case for jumping ahead and seeing which range of regimes performs the best - that would be implicit fitting!
Over all instruments pooled together...
.... the size of each group comes out at:
That's different from the 25,50,25 you'd expect. That's because  vol isn't stable over this period and we're using backward looking quantiles, rather than doing a forward looking cheat where we use the entire period to determine our quantiles (which would give us exactly 25,50,25).
Still we've got a quarter in our high vol group, which was what we are aiming for. And I feel it would be some kind of cheating to go back and change the quantile cutoffs having seen these numbers.

Testing the significance of overall performance in different vol environments

I really ought to end this post here, as the answer to the original question is a firm no: you shouldn't change your speed as vol increases.
However we've now been presented with a new hypothesis: "Momentum and carry will do badly when vol is relatively high"
Let's switch gears and test this hypothesis.
First of all let's consider the statistical significance of the differences in return we saw above:
These are p-values, so a low number means statistical significance. Generally speaking, with the exception of carry, the biggest effect is when we jump from medium to high vol; the jump from low to medium doesn't usually result in a significantly worse performance.
So it's something special about the high-vol enviroment where returns get badly degraded.

Is this an effect we can actually capture?

One concern I have is how quickly we move in and out of the different vol regimes; here for example is Eurodollar: 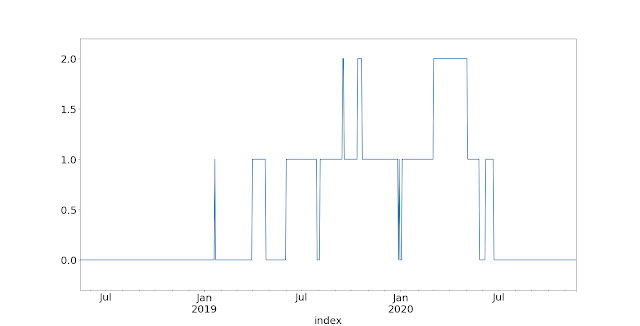 Rather than using regimes, I think it would make more sense to do something involving a more continous variable, which is the quantile percentile itself, rather than the regime bucket that it falls into. Then we won't drastically shift gears between regimes.
Recall our three regimes:
One temptation is to introduce something just for the high regime, where we start degearing when our quantile percentile is above 75%; but that makes me feel queasy (it's clearly implicit fitting), plus the results with higher lags indicate that it might not be a 'high vol is especially bad' effect, but rather a general 'as vol gets higher we make less money'.
After some thought (well 10 seconds) I came up with the following:
Multiply raw forecasts by L where (if Q is the percentile expressed as a decimal, eg 1 = 100%):
L = 2 - 1.5Q
That will vary L between 2 (if vol is really low) and 0.5 (if vol is really high). The reason we're not turning off the system completely for high vol is for all the usual reasons; although this is a strong effect it's still not a certainty
I use the raw forecast here. I do this because there is no guarantee that the above will result in the forecast retaining the correct scaling. So if I then estimate forecast scalars using these transformed forecasts, I will end up with something that has the right scaling.
These forecasts will then be capped at -20,+20; which may undo some of the increases in leverage done when vol is particularly low - but

The first thing I did was to see what the L factor actually looks like in practice. Here it is for Eurodollar [I will give you the code in a few moments]: 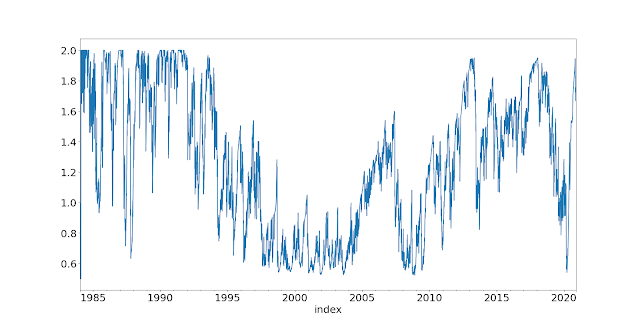 It sort of seems to make sense; there for example you can see the attenuation backing right off in early 2020 when we had the COVID inspired high vol. However it worries me that this thing is pretty noisy. Laid on top of a relatively smooth slow moving average this thing is going to boost trading costs quite a lot. I think the appropriate thing to do here is smooth it before applying it to the raw forecast. Of course if we smooth it too much then we'll be lagging the vol period.
Once again, the wrong thing to do here would be some kind of optimisation of post cost returns to find the best smoothing lookback, or something that was keyed into the speed of the relevant trading rule; instead I'm just going to plump for a ewma with a 10 day span.

Testing the attenuation, rule by rule

Here then is the code that implements the attenuation: